Discover the Lowlands, Highlands and islands of bonnie Scotland.

“Wherever i wander, wherever I rove, the hills of the highlands for ever I love,” wrote Scotland’s most famous poet, Robert Burns. And, from its wild Highlands to its lush Lowlands, its lively cities to its uninhabited islands, Scotland is an easy country to fall for.

Explore castles and lochs. Hike past moors and mountains. Take in fields of thistle and heather. Just make sure you pack for cool, changeable weather. In fact, you may want to learn some choice Scottish words so you can commiserate with the locals. Scotland’s weather can be dreich (miserable), jeelit (freezing), mochie (clammy) and snell (biting) – sometimes all at once.[1] 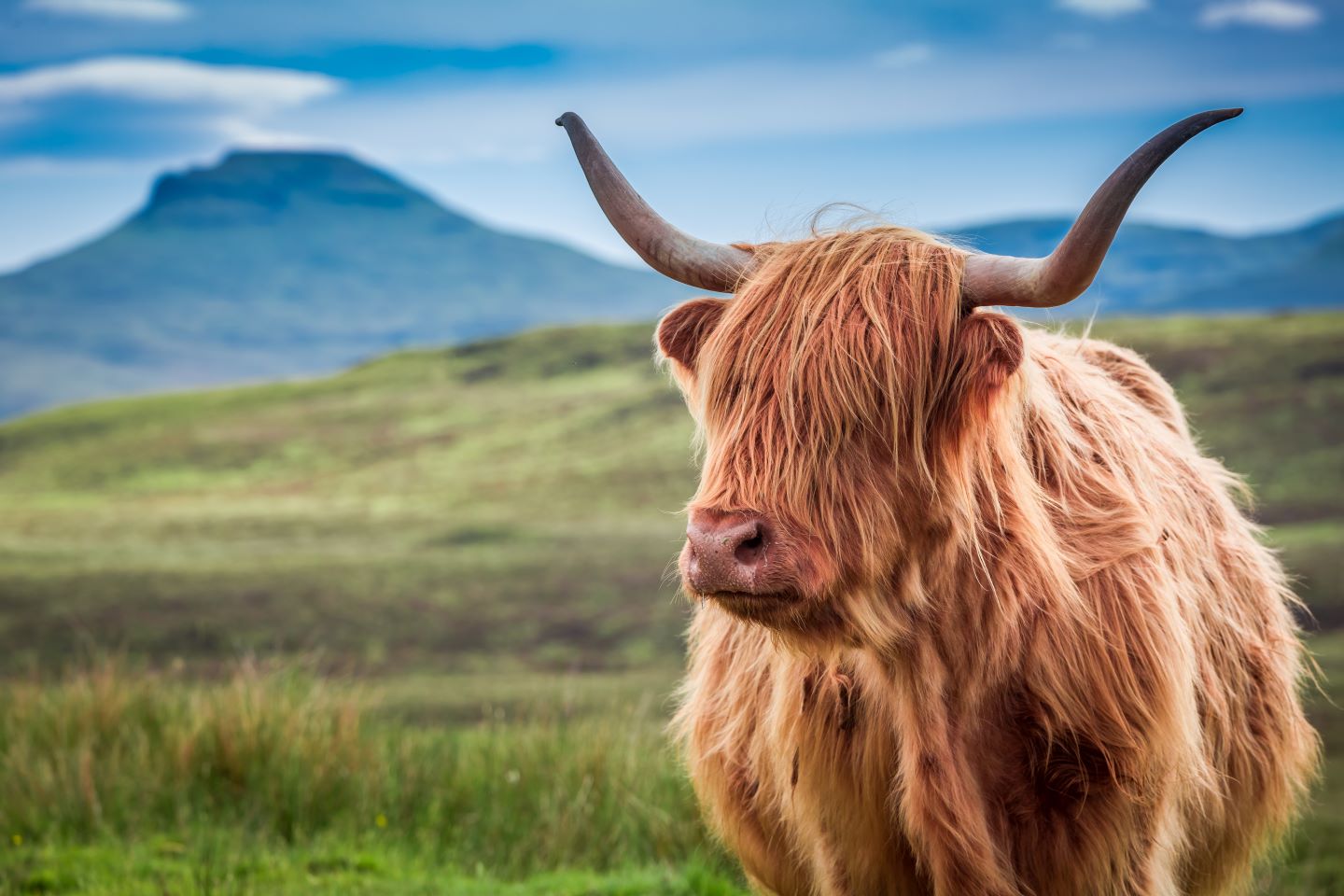 A highland cow, or Heilan coo in Scots, stands out from the fold with its distinct curved horns and reddish fur.

Edinburgh Castle, its earliest buildings constructed in the 12th century, keeps watch over Scotland’s capital and is home to the Stone of Destiny, Honours of Scotland (crown jewels) and Mons Meg, a 15th-century siege cannon.[2] The beautiful city below, divided into the medieval Old Town and the neoclassical New Town, hosts the world’s biggest arts festival, the Fringe, every August – but it is a year-round destination for tourists looking for beauty, history, culture, fine dining, whisky tastings and ghost tours. Climb Arthur’s Seat, an extinct volcano, for picture-perfect views.[3]

Known for its music and clubbing scene, including iconic performance venue the Barrowland Ballroom, Glasgow also packs in plenty of theatres, museums, art galleries and sophisticated contemporary cuisine. Wander through the 12th-century gothic Glasgow Cathedral and Necropolis, join a chocolate and whisky tour at Clydeside Distillery, and admire the Finnieston Crane standing proud on the River Clyde as testament to Glasgow’s industrial heyday.[4]

The granite city of Aberdeen sparkles in Scotland’s northeast, in the heart of “castle country.” Aberdeenshire boasts the largest number of castles per acre in the United Kingdom – there are a total of 260 to see.[5] Dolphins frolic in Aberdeen’s harbour, and you may glimpse minke whales, porpoises and puffins from nearby cliffs.[6] 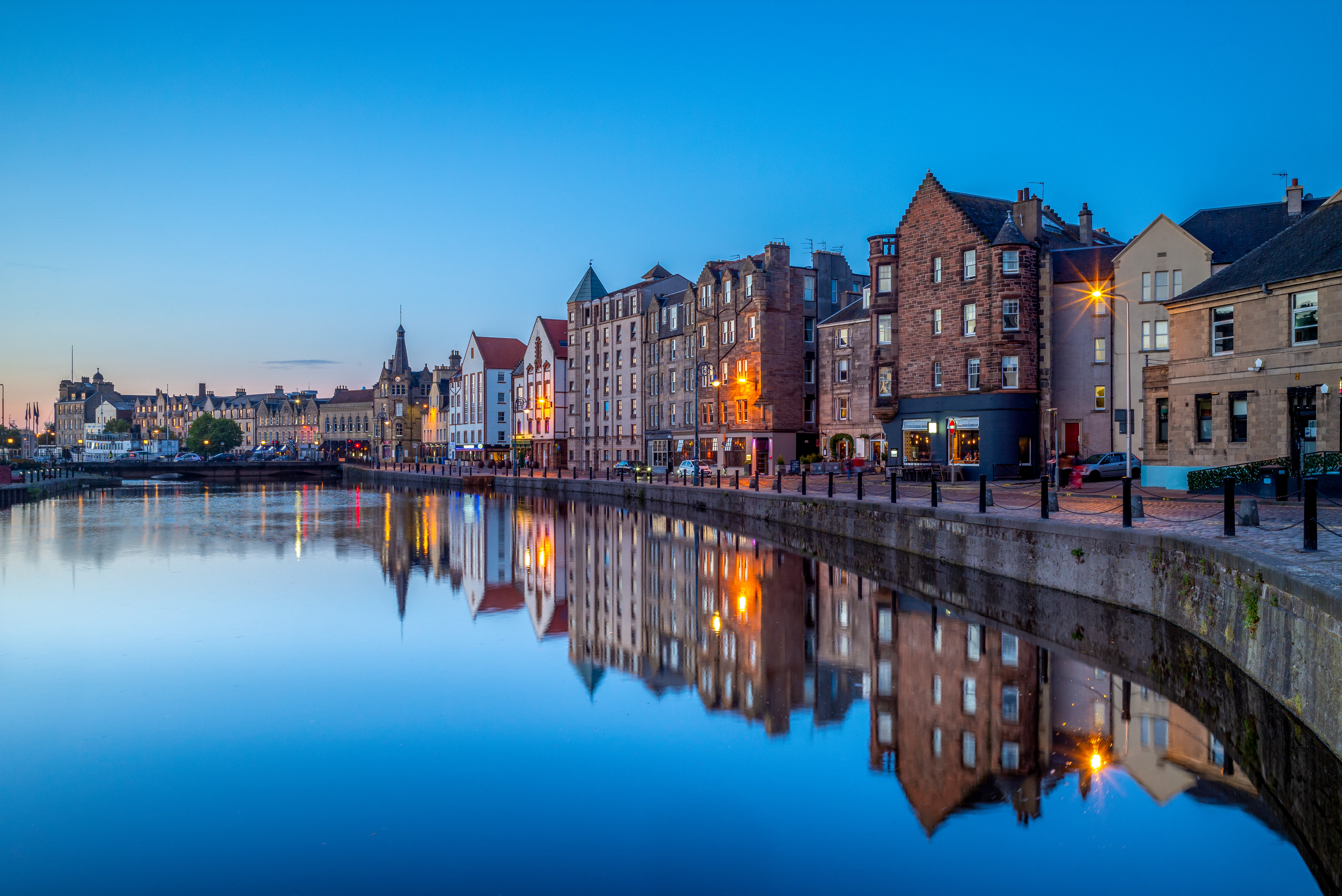 The Water of Leith in Edinburgh walkway allows pedestrians and cyclists to meander alongside the waterfront, away from the hustle and bustle of the city.

Everyone’s heard of Loch Ness and its monster, but Scotland has many other gorgeous lakes. The largest is Loch Lomond, not far from Glasgow, with woods and meadows to the south and mountains marking the start of the Highlands to the north. Investigate an island or two in a kayak or canoe, camp in the surrounding Trossachs National Park or climb looming Ben Lomond for the view.[7]

Head north into the Highlands and you’ll find Scotland’s highest peak, Ben Nevis, a magnet for hikers that offers both an easier and a more challenging trail. From the summit, when skies are clear, you can see Northern Ireland.[8] Use Aviemore as a base to explore the Cairngorms National Park’s forests and mountains, where eagles and ospreys soar.[9] Or set off from Glencoe village into Lochaber Geopark, where you may stumble on out-of-this-world locations featured in the Harry Potter movies and the James Bond film Skyfall.[10]

Scotland’s islands – and there are nearly 800 of them – have a richly deserved reputation for natural beauty as well. Skye in the Inner Hebrides to the west of the country is the most popular with tourists, a land of misty moors, cliffs and lochs.[11] Further out to sea are the Outer Hebrides, linked by ferries and causeways, where you’ll hear Gaelic spoken in the streets.[12] To the north of the mainland are the Orkney and Shetland island groups. Step back 5,000 years at the Heart of Neolithic Orkney, on the UNESCO World Heritage List for its chambered tomb, two stone circles and well-preserved Skara Brae settlement.[13] Or head even further north to the Shetlands, home of Shetland ponies as well as gannets, puffins, otters, seals and orcas, and named one of Lonely Planet’s best destinations in Europe in 2019.[14] 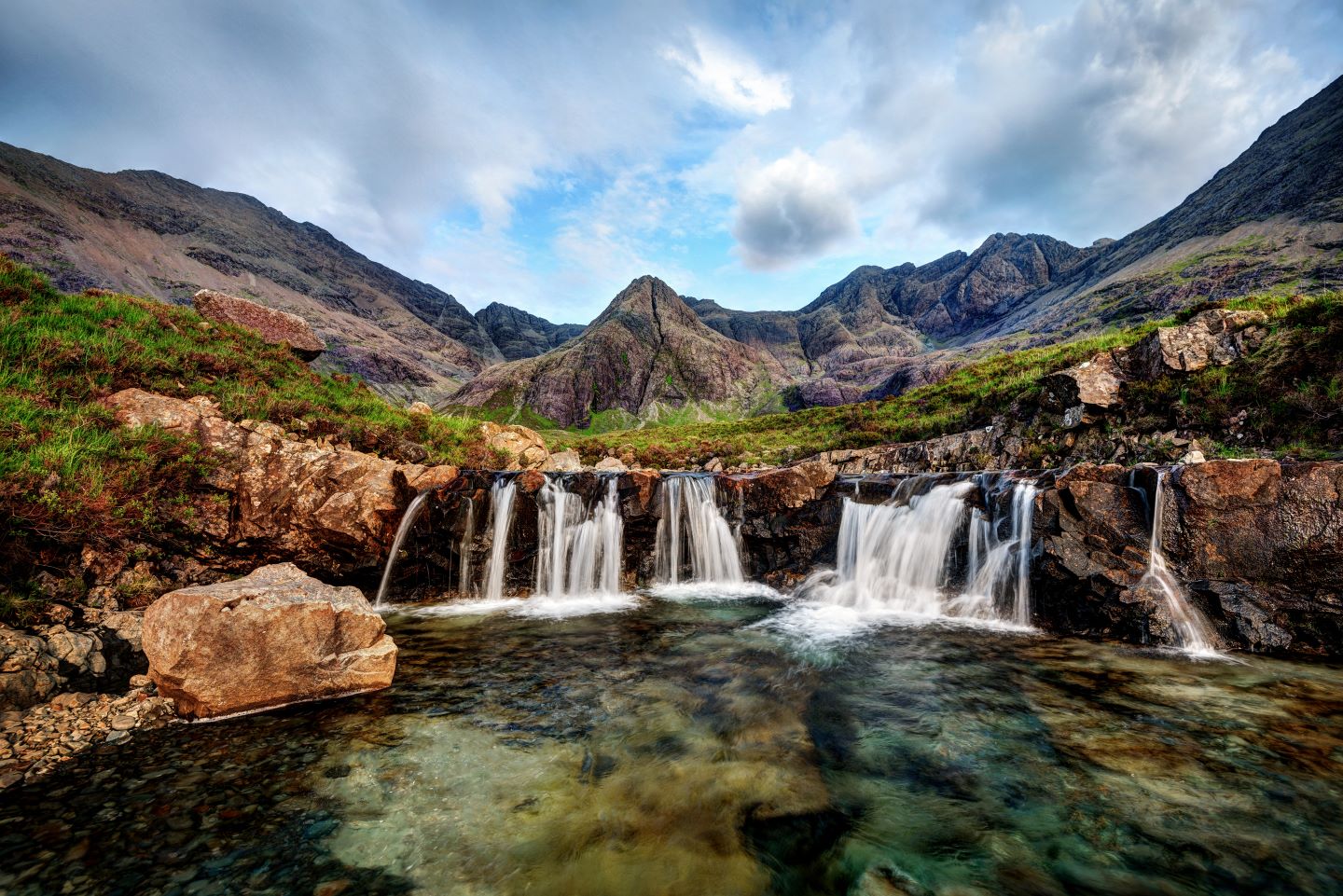 The Fairy Pools on the Isle of Skye are rock pools of crystal-clear spring water fed by a series of waterfalls from the Cuillin mountains. Although the water can appear as blue as a tropical sea, the temperature can only be described as freezing.

The national dish in Scotland is haggis, a mix of meat, oatmeal, onions and spices traditionally cooked in a sheep’s stomach (often replaced today with synthetic sausage casing). Served with bashed neeps (turnips) and mashed tatties (potatoes), it’s the centrepiece of a Burns Supper, the January 25 tribute to Robert Burns – who wrote an entire poem about it called “Address to a Haggis.”[15]

That said, there’s a lot more to modern Scottish cuisine than haggis. Specific cheeses, regional beef and lamb, wild and farmed salmon, and Scotch whisky are so flavourful and unique that they have protected geographical status within the European Union.[16] Whether you pick up local delicacies at a farmer’s market for a casual picnic or sit down to an elegant dinner at one of nine Michelin star  restaurants, you’ll appreciate the fresh taste of foods grown in Scotland’s fertile soil and clear waters.[17] 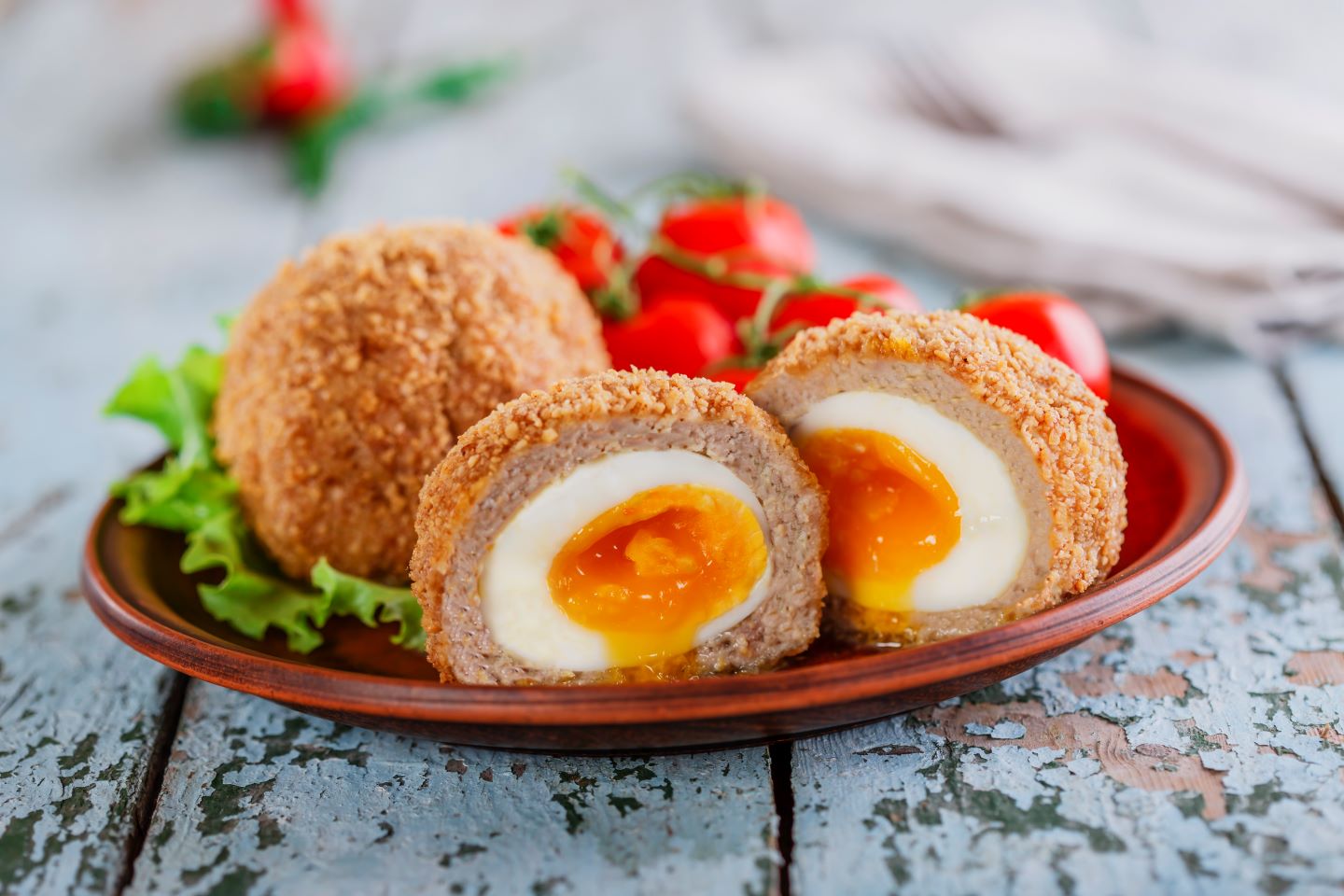 Scotch eggs – made from boiled eggs wrapped in sausage meat and rolled in bread crumbs, then fried to a golden crisp – are one of Scotland’s more well-known culinary delights.

From the telephone to the television, anesthesia to penicillin, the pedal bicycle to the steam engine, Sir Walter Scott to Ian Rankin, this small country’s people have left their inventive mark on the world.[18] Explore the dramatic mix of landscapes and down-to-earth culture that inspired them when you book your trip to Scotland.

© 2019 Manulife. The persons and situations depicted are fictional and their resemblance to anyone living or dead is purely coincidental. This media is for information purposes only and is not intended to provide specific financial, tax, legal, accounting or other advice and should not be relied upon in that regard. Many of the issues discussed will vary by province. Individuals should seek the advice of professionals to ensure that any action taken with respect to this information is appropriate to their specific situation. E & O E. Commissions, trailing commissions, management fees and expenses all may be associated with mutual fund investments. Please read the prospectus before investing. Mutual funds are not guaranteed, their values change frequently and past performance may not be repeated. Any amount that is allocated to a segregated fund is invested at the risk of the contractholder and may increase or decrease in value. www.manulife.ca/accessibility