The two financial terms we hear about the most shouldn’t be confused.

In the world of financial news, headlines can be confusing. Just when one proclaims that stock markets are hitting record highs, another may just as easily say the economy is in deep trouble. But how can this be? How can stock market numbers look so rosy next to a gloomy outlook for the economy?

The simple explanation is that the two are very different. Yet they each affect one another to such a significant degree that the relationship between them remains critical to our financial system – even when they move in different directions.

Stock markets, such as the Dow Jones Industrial Average, the Standard & Poor’s (S&P) 500 Index and the S&P/TSX Composite Index (Toronto Stock Exchange) understandably get a lot of attention. After all, stock markets are where the action is. Massive amounts of money are traded each day, while numbers bounce between highs and lows in reaction to the latest economic news and activity. Meanwhile, speculation about what will pay off and what won’t continuously drives the markets forward.

At their core, stock markets showcase the financial strength of publicly listed companies from various sectors of the economy, such as energy, natural resources, finance and technology. They thrive on a combination of speculation, factual financial information and risk tolerance, which investors measure to project a company’s potential for future profit and growth. The economy, in contrast, is considerably larger and more complex and affects people’s lives more directly than the markets.

When the COVID-19 pandemic spread around the world in early 2020, global stock markets went into a tailspin. Many businesses were closing, most air travel was grounded indefinitely and unemployment numbers were rising fast. As a result, the Canadian economy suffered its worst quarter ever, contracting 38.7 per cent on an annualized basis in the second quarter of the year.[1] But even as the disease raged on, markets began to recover their losses through the second quarter despite the economic impacts of the widespread effort to contain the virus. The market momentum continued in defiance of the dire economic outlook.

“The stock market is meant to be forward-looking. In general, what you see right now in the economy is what’s going on right now, such as production, employment and so forth. Even in normal times, stock prices and economic output would not move in tandem.”

- Itay Goldstein, Professor of Finance, Wharton School of Business at the University of Pennsylvania

To use a vivid example, the five companies with the largest market capitalization on the S&P 500 Index (at December 2020) are the technology giants Apple, Microsoft, Facebook, Amazon and Alphabet (Google), which together account for about one-fifth of the index’s market value.[2]. This concentration means that the overall index does not paint a very broad picture of how the economy is performing overall. Consider that Apple’s share value alone exceeded US$2 trillion in August 2020.[3] In other words, it demonstrates that a single company can hold more stock value than all the other companies listed on a single stock exchange combined. This reflects the great confidence investors have in the current and future state of the company. In contrast, retail operations and energy companies had a tougher time keeping their stock values trending upward in 2020.

It’s clear that even when most of the usually robust economic engines are running on fumes, others can continue to outperform due to the demand for certain products and services. Some of the best examples are companies in the digital technology and health sciences sectors, which have prospered during the pandemic, as more people and businesses became increasingly reliant on them.

The story also changes when you look beyond the major players in each sector. Economic downturns can have a more negative effect on small and medium-sized businesses, which in Canada make up 70 per cent of private sector employment.[4] These companies generally have less ability to withstand the financial pressure brought on by a major crisis and are more at risk of having to cut jobs, shutting down temporarily because of pandemic restrictions and possibly closing down for good, which further undercuts economic activity.

S&P/TSX Composite Index performance vs. unemployment in Canada in 2020

As seen in this line graph below, the S&P/TSX Composite Index has almost fully recovered from the dramatic market slide that occurred in March 2020. Meanwhile, the unemployment rate remains above levels seen at the beginning of the year. This illustrates that even though the current state of the economy is far from perfect, stock markets can climb higher on future expectations. 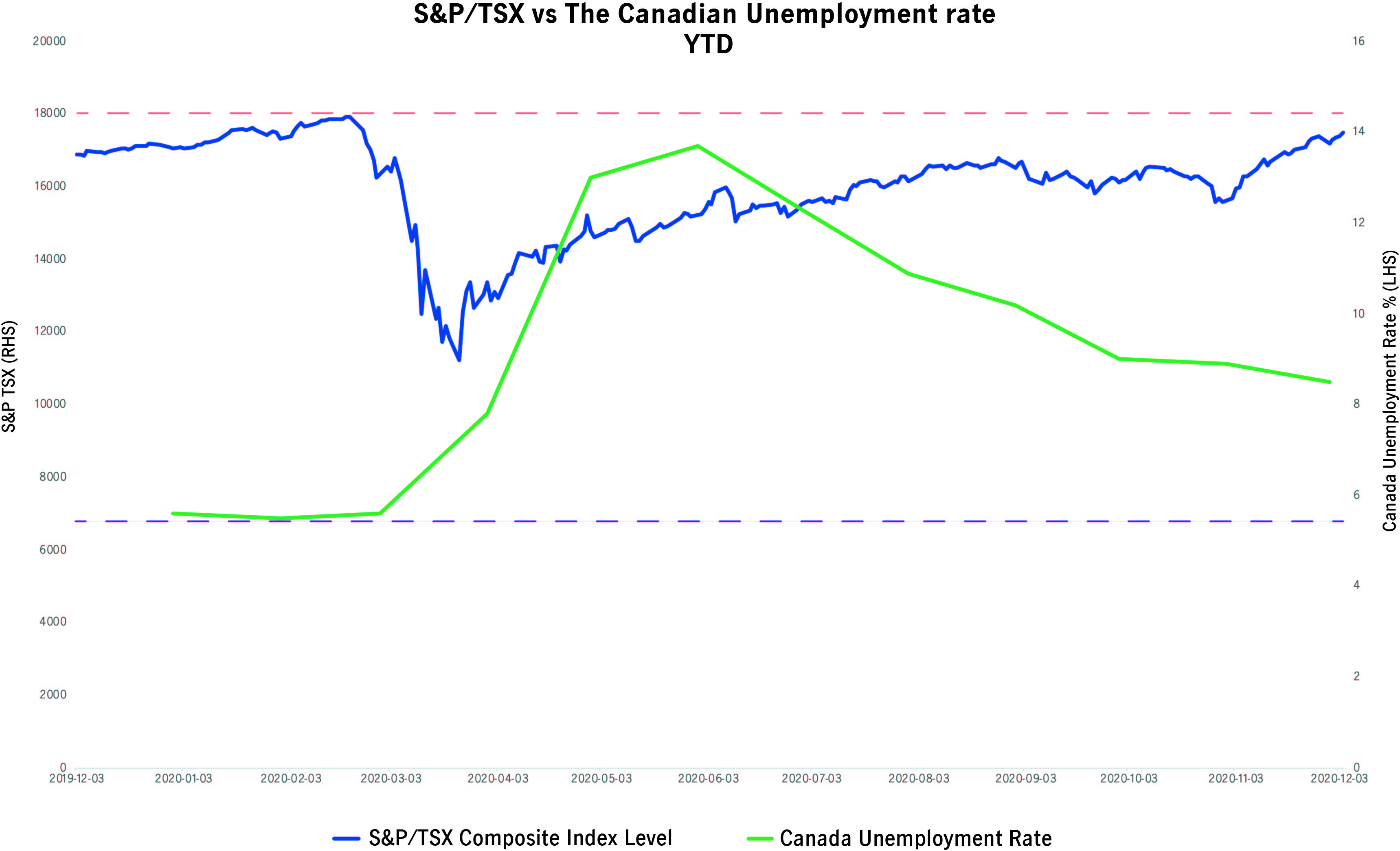 S&P 500 Index performance vs. unemployment in the United States in 2020

This line graph shows how the S&P 500 Index has more than recovered from the declines in March. Though the U.S. unemployment numbers have improved, they have not returned to pre-pandemic levels. Historically, a booming economy has been one of the key drivers of market optimism. Yet, the U.S. and Canadian markets continue to climb based on the expectation of better economic conditions in 2021 and beyond. 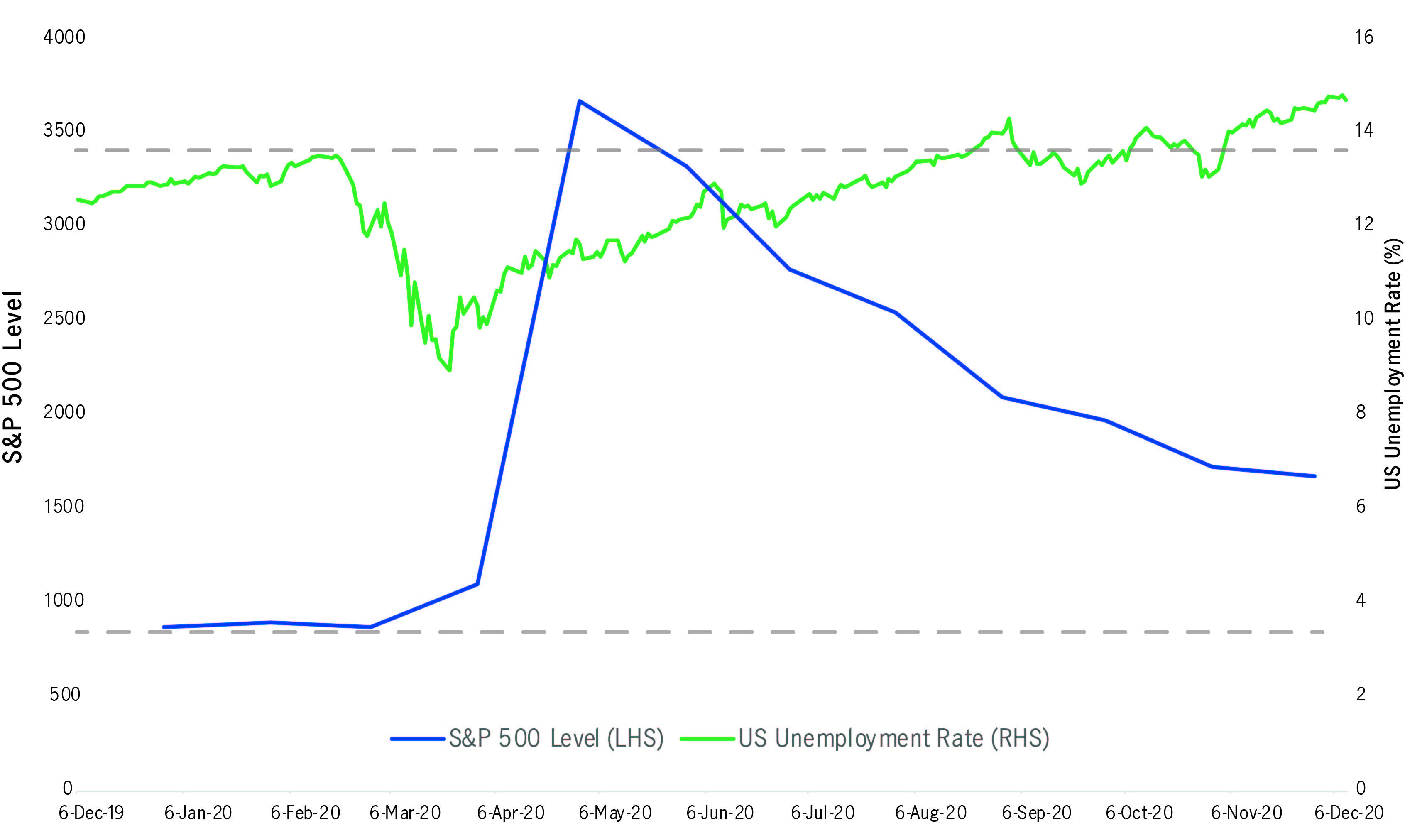 Throwing money at a sinking ship

When the economy shows signs of severe weakness or is wounded by a crisis, as it was in 2020, spending money can be an effective solution. It may seem counterintuitive, but governments of prosperous countries can turn to quantitative easing (QE) to provide some relief. QE is a monetary policy by which central banks, such as the U.S. Federal Reserve (the Fed) and the Bank of Canada, increase the domestic money supply with the aim of generating more economic activity through loans, spending and investing. The central banks fund the money-making by buying long-term government bonds and other securities. Placing more money into circulation also helps keep interest rates low, which can encourage more borrowing and spending to keep the economy afloat.

Many countries initiated QE early in the pandemic to help the world’s biggest economies avoid a more lengthy, widespread economic crisis. At the first sign of serious trouble, the Fed injected more than US$700 billion of new money into the U.S. economy to keep the markets and the larger economy in motion. The Bank of Canada plans to continue its QE program into 2021, buying at least $4 billion per week of Government of Canada bonds (down from $5 billion weekly earlier in 2020).[5] 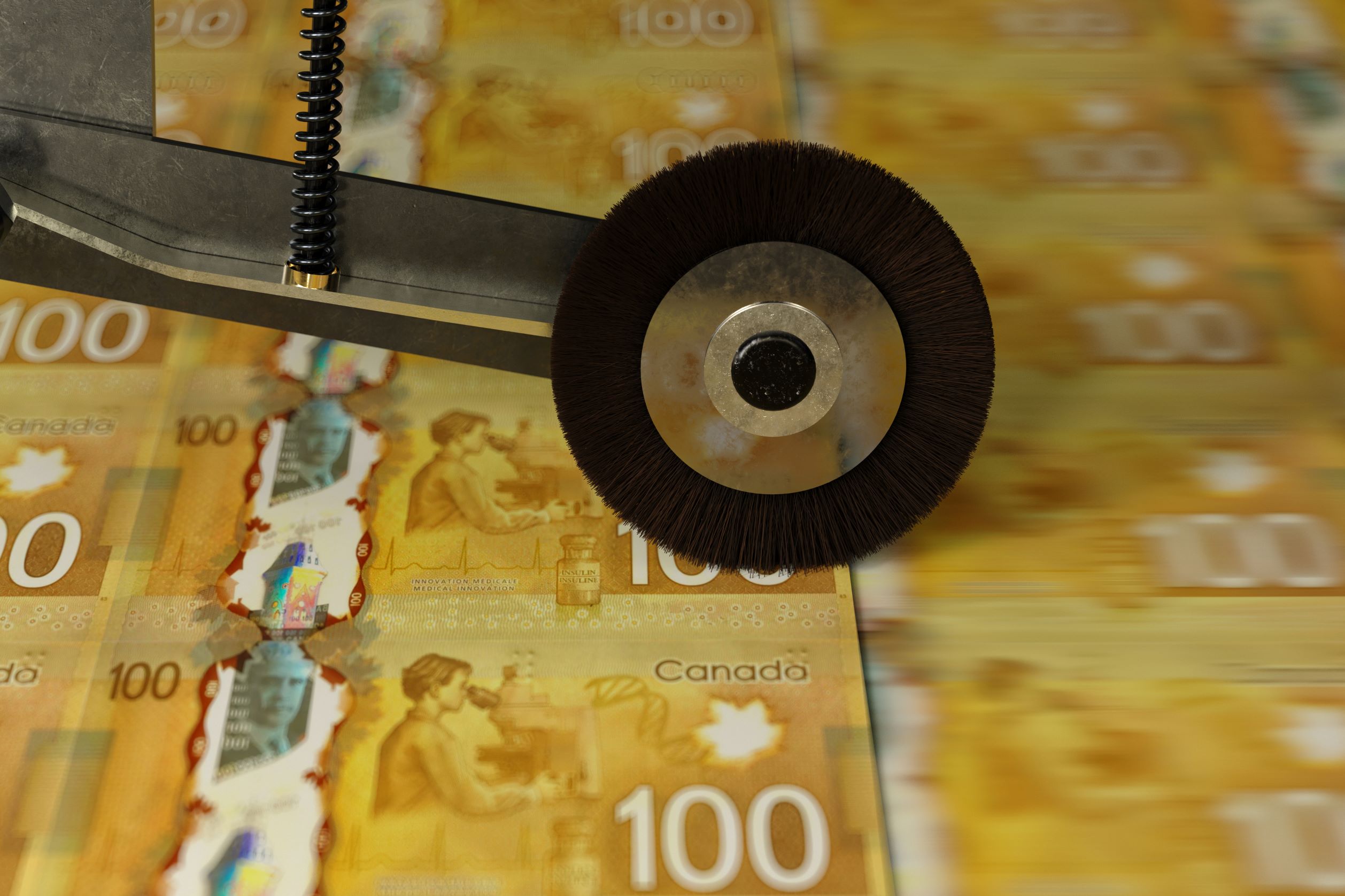 The threat of inflation

Using QE to inject a well-intentioned boost to the economy doesn’t come without risk. A sudden increase in the money supply also has the power to increase inflation, which can weaken economic growth by raising the prices of goods, services and commodities. Another result can be stagflation – a sluggish economy with high unemployment, saddled with little economic output. However, QE appears to have been an effective strategy through most of 2020, as prices have remained relatively stable and deficit spending has kept pace with demand.

“There would be little argument that quantitative easing to support the economy during the first-wave pandemic shutdowns was needed for stability, but without the economic growth required to balance the substantial increase in the North American money supply, inflation becomes the next challenge. We expect to see an increase in inflation going into 2021, settling in around the range of 2.5 to 3 per cent for an extended period of time.”

Relying on QE to combat economic upheaval also comes with a risk of devaluing the currency. Although cheaper money can help domestic manufacturers export goods for less on the global market (which may help stimulate growth), it can make imported goods more expensive and cause the cost of production and consumer price levels to increase. The ongoing challenge is to maintain a balance between the two until the economy can sustain itself in a more typical environment.

Good news is good for business

As the costly fight against COVID-19 begins to show signs of progress with the discovery and distribution of promising vaccines, stock markets are reacting to a renewed sense of optimism about the global economy. However, it’s important to remember that widespread prosperity, rising employment and increasing trade and investment are the goals that countries will continue to strive towards before any realistic claims of victory over the pandemic can be made.

Overall, the future is starting to look brighter. Speaking to your advisor, to learn more about being well positioned to benefit from the good news and gains that could emerge in 2021, would itself be a wise investment.

© 2021 Manulife. The persons and situations depicted are fictional and their resemblance to anyone living or dead is purely coincidental. This media is for information purposes only and is not intended to provide specific financial, tax, legal, accounting or other advice and should not be relied upon in that regard. Many of the issues discussed will vary by province. Individuals should seek the advice of professionals to ensure that any action taken with respect to this information is appropriate to their specific situation. E & O E. Commissions, trailing commissions, management fees and expenses all may be associated with mutual fund investments. Please read the fund facts as well as the prospectus before investing. Mutual funds are not guaranteed, their values change frequently and past performance may not be repeated. Any amount that is allocated to a segregated fund is invested at the risk of the contractholder and may increase or decrease in value. www.manulife.ca/accessibility